The Lovelace family were the first permanent settlers on Sicily Island.  John Lovelace, Sr. was born in Virginia on December 28, 1740.  He married Anne Hughson, daughter of Edward and Anne Washington Hughson.  Anne was born on Popes Creek, Westmoreland County, Virginia, on December 4, 1742. 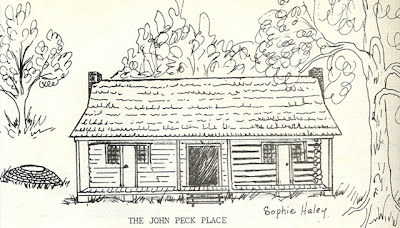 Above is a sketch of the first home built by the John and Anne Lovelace.  The log cabin was located near the present township of Sicily Island, at the head of Lake Lovelace.  The original house had only two rooms.  Later, an open hallway and two more rooms were added.  These were of clapboards.  There was a fireplace at each end of the house.  A front porch was built all the way across the length of the house.  The water supply in the early days was from a cistern nearby.

William Smith Peck (1842-1881) and his wife, Florence Celeste Lovelace (1845-1881) made their first home here when they married in 1868.  Florence was the great granddaughter of John, Sr. and Anne Lovelace.  They later sold the small house and property to a relative, Zachariah Kirkland.  The property and house were later owned by John Peck, an uncle to William Peck.  Thus it is identified as the John Peck Place. 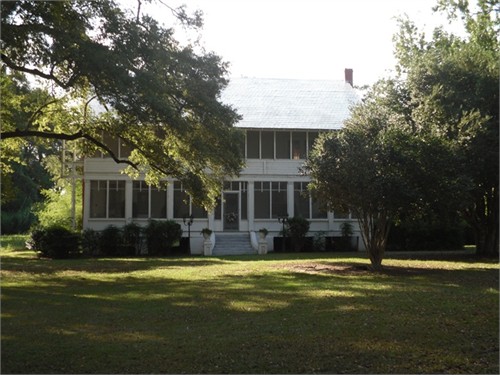 In the late 1790s, John Lovelace, Sr. built the home pictured above for his wife, Anne.

Children born to John and Anne Hughson Lovelace were:

In 1864, a Steamboat Gothic mansion was constructed near the old home site.  The home was of pre-fab construction and was shipped by steamboat to Sicily Island along with craftsmen and carpenters who remained until the house was completed.  This house later became known as the Gillis House.  (Our Island Heritage, Vols. 2-3, 1977-78, compiled by Sophie Haley and Mickie Smith)

More information on the Lovelace family can be found Here and Here.