Naming (and re-naming) of a Town

In Sicily Island:  A Partial History, compiled by Mickie Smith, she states the following:


The beginning history of the land we now know as Sicily Island goes back to long before the coming of the white man.  We now associate the name Sicily Island to a town, but at that time there was no town.  The name referred to the entire area surveyed which is bounded by these waters:  The Ouachita River, Boeuf River, Deer Creek and Tensas River.  Since tradition has it that the men who surveyed the area named it Sicily Island because in shape it resembled their homeland in the Mediterranean Sea, the Island of Sicily, this area was evidently surveyed after 1762, and before 1803, which was the time Louisiana was under Spanish rule.

By the late 1800's the prospect of the much talked about railroad was coming closer.  Many people looked forward to the railroad transportation, but as with all progress, there were those people who opposed it.  Never the less, the railroad became a reality.

At this time, Henry and Isadore Newman of New Orleans owned a great portion of the land around 'The Island'.  In 1892 Clerk of Court Records, Catahoula Parish, Conveyance Bk. 5, p. 254, there is this record:

H. and I. Newman sold to Louis K. Hyde twenty nine and fifty five one hundredths more or less acres.  The consideration of this sale to Hyde is that the said H. and I. Newman agreed to deed such lands for a town-site to induce capitalists to build, locate and construct the New Orleans and North Western railroad through said lands and that portion of Catahoula Parish and to induce the platting of said lands into a town-site and the naming of said town and station for Miss Florence, the eldest daughter of Henry Newman, the said Louis K. Hyde being a member of the firm of Charles Hyde and Son, which firm has invested largely to secure the construction of the New Orleans and North Western Railway...

Mrs. Mickie referenced the following from A History of Sicily Island, written by Will Peck, IV: 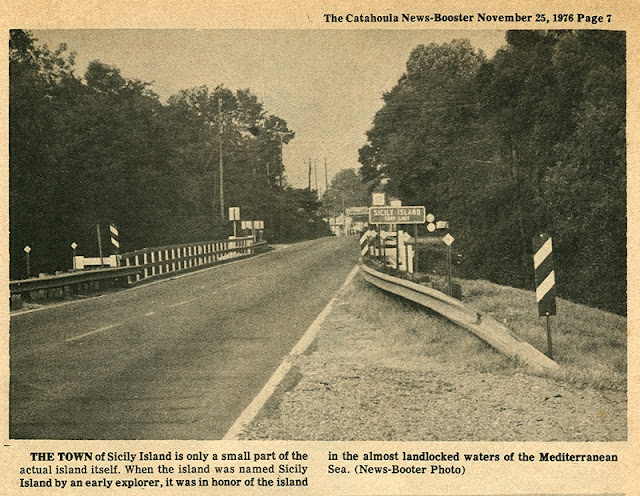 The photograph below was taken on the other side of a new bridge, facing towards town.  The old Highway 15 two-lane has been replaced by a four-lane.  The trees and homes that once lined both sides of the bluff entrance into Sicily Island are now gone. 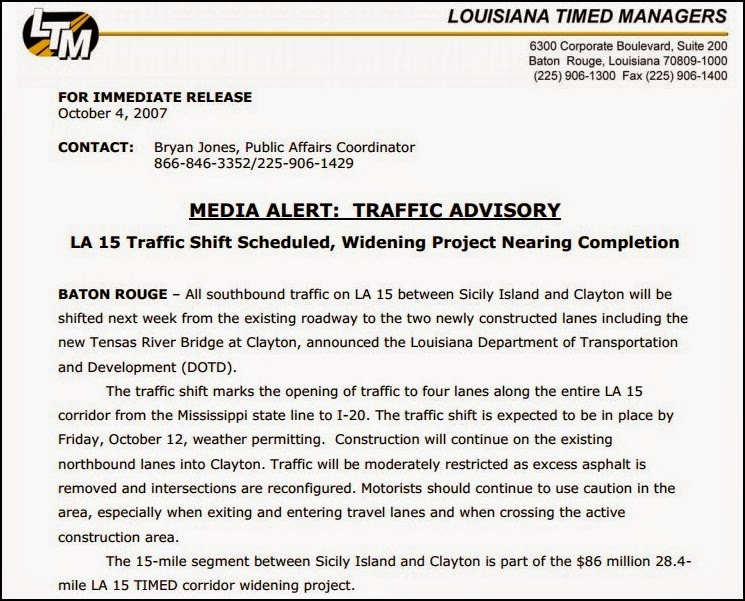