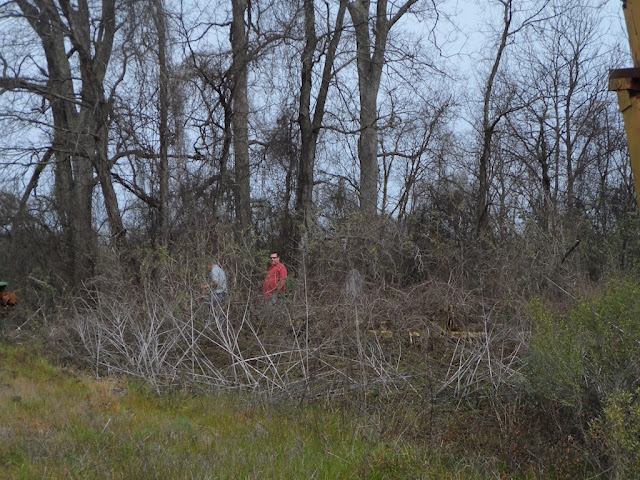 The Greenville Cemetery has been referred to in the past as Sunny Side Cemetery, Hoover Cemetery, and more recently, the McIntosh Plantation Cemetery.

This cemetery is located on the McIntosh Plantation which is about five miles outside Sicily Island on LA Hwy 15/US Hwy 425 south near Clayton, Concordia Parish, Louisiana.

The Find-A-Grave website has the Greenville Cemetery listed but the individual burial memorials are entered under McIntosh Plantation Cemetery with an address of Clayton, Concordia Parish, Louisiana.

The cemetery can be seen from Highway 15 and is located among a small stand of trees sitting in the middle of a field.  When fellow researcher, Jon Garner, led my daughter and I to this location we were hoping to find and document the grave stones of Jon's ancestors.

We discovered one stone that was facedown in the underbrush.  Jon was able to turn the grave stone over so that we could document the person buried in this location.

The markings on the stone were hard to read but old cemetery records show the marker to be that of Rev. G. B Mathews (1865-1934). Further research on Ancestry shows this to be George B. Matthews who was married to Cassie Rabb.  The 1930 U.S. census record shows them living in Ward 1 of Catahoula Parish.


We were disappointed to find no other grave markers in our search of the remaining area.   As we were heading back to our vehicles, two young men from the McIntosh family drove up to see who we were and to ask if we needed some type of assistance.  I'm sure these young men wondered what we were doing trekking around on their property.  After introductions were made and explanations given for our visit, the young men pointed out a grave stone we had completely overlooked.

Fallen trees and underbrush had to be pushed aside for a closer view of the marker.  It can be seen in the center of the above photograph.  This marker had several Daniels family names listed on all four sides.


Henry P. Daniels appears to be the oldest person buried in this cemetery.  He was married to Sarah Jane Hoover in 1847.   Sarah's name appeared on the marker as well.  However, I failed to photograph a full view of this side of the grave stone so you cannot see her date of birth (1829) and death (1914).


Other members of the Henry P. Daniels family were also noted on the stone.


Other children born to the marriage of Henry P. Daniels and Sarah Jane Hoover:

Henrietta A. (b. abt 1864); burial location unknown at this time

Another stone was discovered underneath a fallen tree.  One of the McIntosh young men offered to assist us by using his tractor with a front-end loader to lift the fallen tree.  What we discovered was a small stone with no markings on either side.  The stone was too large to be a foot stone so we believe it was at one time a headstone.  Unfortunately there had never been any markings or the markings had worn off over time.

Others appearing in the cemetery lists above and are believed to be buried in the old Greenville Cemetery:

Bee Watson (b. 1935?); He is shown in the Greenville list above as being born on March 26, 1935 but this could be an error in transcription.   His FindAGrave memorial shows his DOB as 1845 and DOD as 1925. Another interesting note is that his memorial shows a tombstone inscription of 'La Pvt Wirt Adams Regt CSA' which signifies he was a soldier in the Civil War.

An application for headstone was found on Ancestry.com that shows he served during WWI.  The handwritten notes in red at the top of the record show an Enlistment date of April 6, 1918 and an Honorable Discharge date of July 26, 1919.  DOD is shown as March 26, 1935.  The application was completed on September 24, 1935. 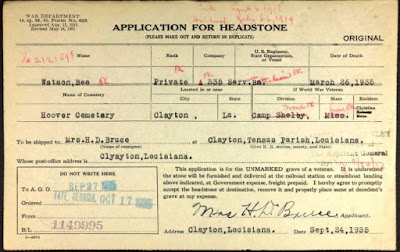 Since we were unable to locate his headstone, Bee Watson remains a mystery.  Any help with solving this mystery would be appreciated.  If any of you have information, please leave a comment in the comment section below or email me at the address listed in the 'About Me' tab at the top of this page.

A special thanks to my daughter, my friend and fellow 'graver', Jon Garner and to Mr. McIntosh for his assistance. 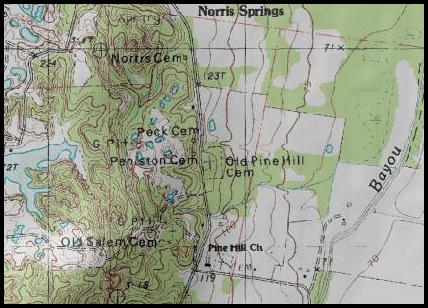 Using GPS to guide us, we located what we believed was once the Norris Cemetery.  The photographs below were our first glimpses of the location. 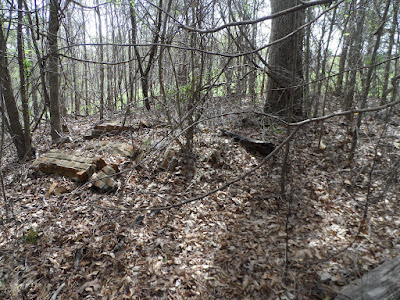 At first glance, the area appeared to be the former site of some type of building.  We noticed the fallen brick structure but also wondered about the height of the fallen portions.  They seemed to be only a couple of feet tall.  This led us to question whether the structure had once been a building or if it had been a low-rise wall around burial locations.

We found one area that could possibly have been a burial site but it appeared to be too short and narrow. Perhaps it had been a walkway between two burial locations? 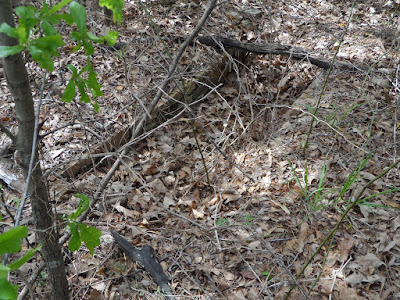 Just outside the bricked area we discovered a flat stone beneath leaves and fallen branches.  After clearing the area we found a memorial marker for Dr. Richard Henry Norris. 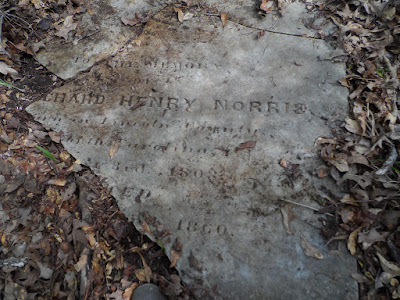 I note that the marker shows, "To The Memory Of" because it has been told that Dr. Norris was originally buried in a vertical grave located closer to Norris Springs and that his remains were later moved to another location.

It could be that the stories told are true and his remains were moved to a new location.  It is also possible that only a marker was placed in a new location as memorial stones are often placed in locations other than where a person is buried.  However, we searched the area above Norris Springs and found no evidence of a former grave site.

The photograph below shows a portion of another marker we found in what we believe is the Norris Cemetery.  Unfortunately, the top portion was missing so identifying the person buried there was not possible.

The following Norris family members are believed to be buried in the Norris Cemetery:

Other possible grave sites can be seen in the following photographs: