The following article appeared in the May 3, 1896 edition of the New York World: 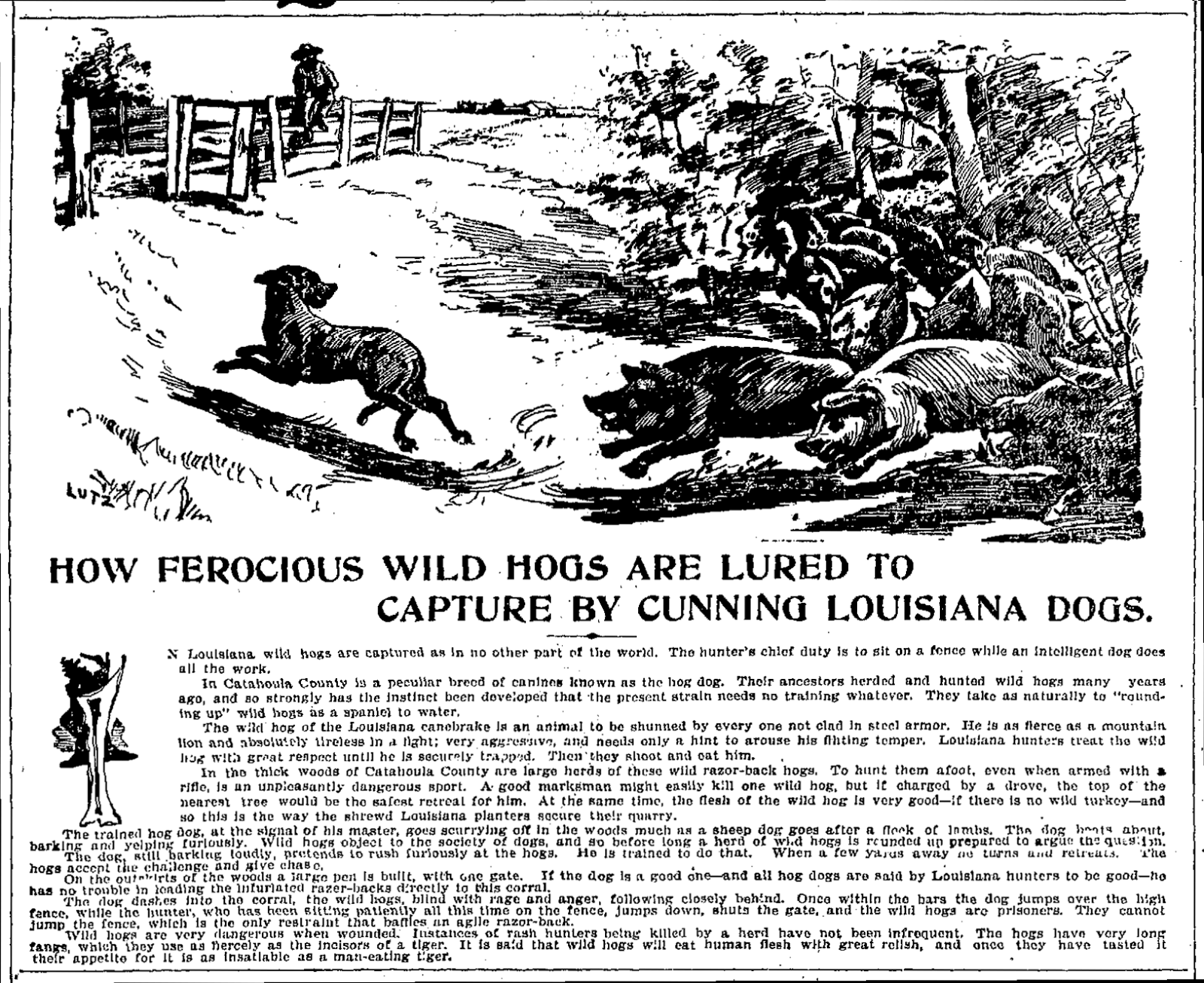 HOW FEROCIOUS WILD HOGS ARE LURED TO CAPTURE BY CUNNING LOUISIANA DOGS.


N Louisiana wild hogs are captured as in no other part of the world.  The hunter's chief duty is to sit on a fence while an intelligent dog does all the work.

In Catahoula County is a peculiar breed of canines known as the hog dog.  Their ancestors herded and hunted wild hogs many years ago and so strongly has the instinct been developed that the present strain needs no training whatever.  They take as naturally to "rounding up" wild hogs as a spaniel to water.

The wild hog of the Louisiana canebrake is an animal to be shunned by everyone not clad in steel armor.  He is as fierce as a mountain lion and absolutely tireless in a fight; very aggressive, and needs only a hint to arouse his fighting temper.  Louisiana hunters treat the hog with great respect until he is securely trapped.  Then they shoot and eat him.

In the thick woods of Catahoula County are large herds of these wild razorback hogs.  To hunt them afoot, even when armed with a rifle, is an unpleasantly dangerous sport.  A good marksman might easily kill one wild hog, but if charged by a drove, the top of the nearest tree would be the safest retreat for him.  At the same time, the flesh of the wild hog is very good---if there is no wild turkey---and so this is the way the shrewd Louisiana planters secure their quarry.

The trained hog dog, at the signal of his master, goes scurrying off in the woods much as a sheep dog goes after a flock of lambs.  The dog hunts about, barking and yelping furiously.  Wild hogs object to the society of dogs and so before long a herd of wild hogs is rounded up prepared to argue the question.

The dog, still barking loudly, pretends to rush furiously at the hogs.  He is trained to do that. When a few yards away he turns and retreats.  The hogs accept the challenge and give chase.

On the outskirts of the woods a large pen is built with one gate.  If the dog is a good one--and all hog dogs are said by Louisiana hunters to be good--he has no trouble in leading the infuriated razorbacks directly to this coral.

The dog dashes into the corral, the wild hogs, blind with rage and anger, following closely behind. Once within the bars the dog jumps over the fence, while the hunter, who has been sitting patiently all this time on the fence, jumps down, shuts the gate, and the wild hogs are prisoners. They cannot jump the fence, which is the only restraint that baffles an agile razor back.

Wild hogs are very dangerous when wounded.  Instances of rash hunters being killed by a herd have not been infrequent.  The hogs have very long fangs, which they use as fiercely as the incisors of a tiger.  It is said that wild hogs will eat human flesh with great relish, and once they have tasted it their appetite for it is as insatiable as a man-eating tiger.