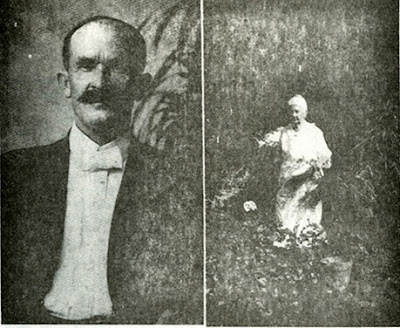 Reverend William Thomas Woodward, minister of the Annual Conference of the Methodist Episcopal Church South was sent by the Conference in December of 1912 to serve the Sicily Island charge.  His family had remained at his former charge of Bienville until the school year was ended in May of 1913.  By the end of his tenure of four years on the charge, the Woodwards had been provided with a permanent home by their son-in-law, William Smith Peck, II.  They lived out the remainder of their lives on the Island.

Reverend Woodward was born at Wesson, Mississippi on December 7, 1866.  He was the son of B. John Woodward of Wesson and Mary Jane McNabb of Tennessee.  He married Rosa Jane Bacot on October 21, 1891.  Rosa, born near McComb, Mississippi on April 6, 1858, was the daughter of Levi Bacot of McComb and Ann Robert of Livingston Parish.  The Woodwards met while they were both attending Cavanaugh College.

Soon after their marriage, Reverend Woodward joined the Louisiana Conference and was sent to Bayou Barbary.  Before his arrival on Sicily Island, he served charges at Simsport, LeCompte, Pineville, Bernice, Haynesville, and Bienville.  Most of these charges covered from four to eight small churches which necessitated many miles of travel each week to cover the circuit.  His work also included revivals which usually lasted from ten days to two weeks, as well as the establishing of new churches, conducting funerals, and performing marriages.

The Woodward family had a storehouse of records of interesting and unusual marriages.  The strangest of which was one which took place while the three Woodward daughters were still in elementary school.

One Saturday, Rev. Woodward, being quite ill with "La Grippe", as influenza was known in those days, had been wrapped in a blanket and his feet plunged into a tub of hot water.  He was trying to get relief from a chill when a knock was heard at the door.  On answering, Mrs. Woodward was surprised to see a couple of about thirty years of age, complete strangers to her.  The man asked, "Is there a minister here?"  Mrs. Woodward told him there was but that he had just had a chill and was too ill to see anyone.  The daughters, however, had been viewing the scene and listening intently, so one ran to tell her father what was going on.  The couple seemed so distressed and anxious that they were allowed to come to the sick minister's bedside where they were married with the minister wrapped in his blanket, his feet still in the foot-tub of hot water, and the three small girls trying to stifle their giggles at such a scene.  Some twenty minutes later, the house had grown quiet and the patient had dropped off to sleep, when the noise of several men on horseback was heard.  Mrs. Woodward fearfully answered the door and was met by a man with a shot gun who asked gruffly, "Has a couple just been married here?"  "they have," she replied, "and they are old enough to know what they are doing, so please leave, my husband is quite ill and has just been able to fall asleep."  The three girls were very frightened as they watched the men leave and could hardly wait until their father waked up to tell him the end of the story.

Mrs.Woodward is remembered as being a kind and gracious lady, a devoted housewife and mother, and one who supported her husband in the work of the church.  Her home was always open to visiting ministers as well as her host of friends.

Rev. Woodward remained active and interested in the work of the church throughout his life.  He participated in Scouting and other youth work, and continued to perform marriages and funerals when called on to do so.  Many couples around Sicily Island fondly recall their wedding ceremony being performed by Brother Woodward.

The three daughters born to the Woodwards were:


Willy Lee was born on March 19, 1895.  After she finished high school in Bienville, she attended summer school at Louisiana Normal and received a first grade teaching certificate.  She began her teaching career in Franklin Parish where she worked for three years.  She then taught at Harrisonburg for a short time before coming to teach at Sicily Island.  Here she taught until the fall of 1923, when she decided to enter Pharmacy School at Tulane University.  After three years, she was graduated with honors and offered a place on the Tulane faculty.  Eight years later, the Pharmacy School was closed and Miss Willy returned to Sicily Island to teach and to care for her aging parents.

She taught school until 1946 when she opened her own retail pharmacy in Sicily Island.  She was also instrumental in securing a part-time doctor for the community.  She continued to work as a pharmacist until her retirement, at which time she was honored with a proclamation from the Mayor, L. W. Franks, declaring a week as "Willy Woodward Week".

After her retirement, she went to make her home with her sister, Estelle.  Miss Willy was active in the Methodist Church, where she served as President of the U.M.W.  She was a long time member of the Sicily Island Woman's Club and served a term as its President.  She was always interested in helping to promote educational and civic progress in the community.

Willy Lee Woodward died in June of 1987.  She is entombed in Highland Park Mausoleum in Sicily Island.  (Editor's Note:  Tombstone photograph is courtesy of Dorothy S. Tiser at FindAGrave.com) 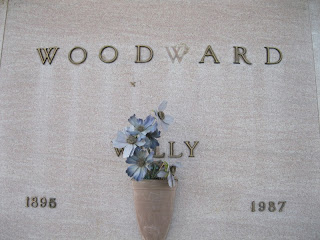 Myrtis Love was born on August 18, 1896.  She graduated from Whitworth College in Brookhaven, Mississippi and began a teaching career in Harrisonburg, Louisiana where she taught for a short time.  Having trained in piano and voice, Myrtis would often assist her father in revivals.  It was in a revival at Oak Grove, Louisiana where she met and later married Andrew Jackson Wyly of Lake Providence in 1920.  Mr. Wyly was a planter and practicing lawyer.

Ten years after their marriage, Mr. Wyly passed away, leaving Myrtis with two young children.  She taught school, managed the land, and educated the children.  She remained in Lake Providence and conducted a successful real estate business and took part in church, educational, and civic affairs.

Children born to the marriage of Myrtis and Andrew Jackson Wyly were: