The Doniphans of Midship Plantation


Thomas Alexander Slaughter Doniphan (T.A.S. Doniphan) came from Virginia by flatboat to Natchez, Mississippi.  Here he met and married Miss Sarah Cartwright, who was editor of a Natchez paper, "The Free Trader".  The Doniphans sent their children up north to be educated.

(Editor's note:  Tombstone photograph for Sarah Cartwright Doniphan is courtesy of Debbie Belk Ellis at FindAGrave.com)
In 1859, T.A.S. Doniphan purchased Midship Plantation, located on Sicily Island, from James Denegre of New Orleans.  Midship consisted of around 950 acres.  This along with other smaller tracts brought his holdings to around 1,500 acres.  The Doniphans moved into a log house which was already built on the place.

This house consisted of rooms on either side of an open hallway and had a full front porch.  It was situated on the cut-off road between Martin High School and the Guice Road, and sat beside a small stream.

This particular spot in later years was known as the Sapp place, as Mrs. Sapp, who was a niece of Mary Glover Doniphan (second wife of T.A.S. Doniphan) inherited it from her.

The following children were born to T.A.S. Doniphan and Sarah Trammel Cartwright:

In 1860, Dr. Henry Doniphan, son of T.A.S. Doniphan by his first marriage, bought Midship from his father and he and his wife, Amelia Scott of Natchez, Mississippi settled into another log house on the place which was located on Hooter's Bayou.  Dr. Doniphan was a Civil War veteran and a charter member of the Harrisonburg Masonic Lodge.

The house depicted below was built in 1910 by Eugene Doniphan on the part of Midship which he inherited.  The only help he had was letting Dan Sumners help him raise the rafters.  This house is located a few hundred yards from where the log house was which Henry and Amelia occupied until their deaths. 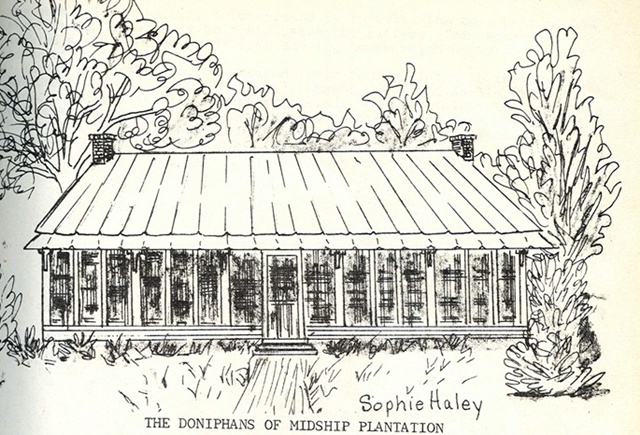 Eugene and Mamie Doniphan reared their four children in this home:  May Usher (Mason), Katie (Rundell), Eugene, Jr.(married Jessie Duke); and Amelia (Ellerbe).  Since the death of his parents, Eugene, Jr. maintained the home as a part time residence, coming on weekends and holidays from his work in Monroe.  (Editor's Note:  Eugene Doniphan, Jr. died in 1989)