From Sicily Island:  A Partial History, compiled by Mickie Smith:


On January 8, 1930, Mr. W. S. Peck, Sr. leased eight acres of land on Ferry Place to the Louisiana State University to use for 4-H Club encampments, agricultural meetings and other meetings of similar and public purposes.

For four weeks in each year, the University was to have sole possession and control of the land and of the buildings that were to be placed there, with the understanding that the exact dates the clubs expected to use the property would be given to Mr. Peck by April the first of each year.

The club would have the privilege of using the lake bordering the property for swimming at all 4-H Club encampments and other meetings.

Mr. Peck was to have the use of the grounds and buildings at all other times other than the four weeks that the 4-H Clubs would be using the property.

The mutual purpose of the parties entering this lease was being the promotion of agricultural education in particular and the prosperity and happiness of the people generally.

This camp had the boys cabins on one side with the kitchen in the center, and the girls cabins on the other side.  4-H Clubs from several parishes would meet here for one two-week session, and then leave and other parishes would have the camp area for the last two weeks of the month.

The lease was signed for a period of ten years subject to renewal at the end of five years if agreeable with both parties, or if the University failed to utilize the property for the 4-H Clubs for a period of two years the lease would be terminated. (Clerk of Court Records, Catahoula Parish, Conveyance Bk. 37.)

This area was used until 1938 for 4-H Club campgrounds and is still referred to as 'The Club Camp'.

From an article published in the June 22, 1936 edition of the Monroe News Star we find that 4-H clubs in Ouachita, Union, Morehouse, Richland and West Carroll parishes attended camp at Ferry Plantation. 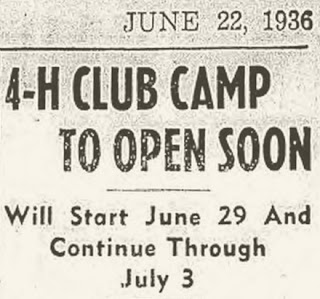 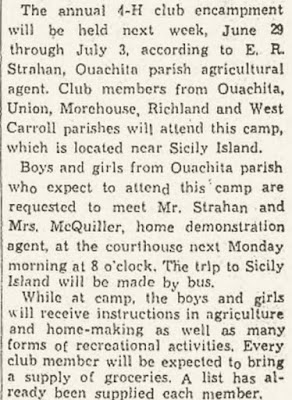